I think that most would agree that the fourth season of Homeland has felt quite different from the other seasons. We are down a main character (i.e. Brody), much of the action is taking place in the Middle East, and, by far, one of the biggest changes of the season comes in the form of Carrie’s characterization. 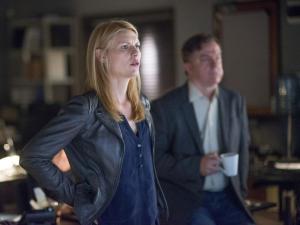 over a much younger man. Sophie Gilbert of The Atlantic wrote a piece around the beginning of season four that seems to echo many of their concerns, and her article even goes so far as to insinuate that season four was taking a nose dive as a result of Carrie’s troubling story-line and character attributes. To be fair she wrote this very early on in the season, but the criticism, particularly as it aligns with some of my classmates’ concerns seems fair even though I mostly disagree.

I made the argument in class and even within comments to my classmates’ blogs that I thought that much of Carrie’s changed characterization in this season can be both understood and attributed to Carrie’s “turning off” of her emotions and not wanting to deal with Brody’s death or Frannie, the product of their intimate relationship. Where seasons one through three relied quite heavily on Carrie utilizing her affective talents to see her through challenging situations, her professional effectiveness has waned this season because she has distanced herself from these very skills.

Episode eight of season four offers Carrie a chance to redeem herself for the remainder of the season and beyond. Through a plan orchestrated by the Pakastani ISI agent, Tasneem Qureshi, Carrie’s medication is switched out with another substance which initiates a psychotic episode. Although Carrie’s ability to hold back these emotions has been coming to a head for the last several episodes (i.e. we have been seeing indicators of the toll this emotional suppression has been taking on her: grinding teeth, trouble sleeping, near-infanticide, crying during sex with Aayan, lashing out at work, etc.) this chemically induced psychotic episode acts as a catalyst for Carrie’s return to what the audience would recognize as “normal” for her character. Probably not what the ISI intended, but here we are…

For the audience, who up until this point in the season has (likely) had a similar experience to my classmates in finding Carrie’s character absolutely reprehensible,  this moment centers Carrie, once again, in a position that calls her mental and emotional stability back into question.

Although this does not seem like such a great thing and Carrie’s mental state is at an extreme, this scene also works to bring Carrie and the Homeland audience back into something of a relational stasis. The audience is used to dealing with story-lines that directly implicate her mental stability as a question that is always at the center of each of her actions (is Carrie crazy or a genius?).

Throughout  this episode of mental instability, Carrie is clearly being pulled out of her apathy and toward a state that will force her to deal with the emotions that she has long been avoiding. This is made the most clear when Carrie hallucinates that Aasar Khan is, in fact, Brody. During this scene, both Carrie and the audience are offered a moment of emotional catharsis. The audience is able to have a few additional moments with a character to whom they grew attached over the first three seasons and Carrie is able to release some of the emotional baggage (i.e. guilt) she has been suppressing in the aftermath of his death by admitting that she was “willing to let [him] die.”

Episode seven, “Redux,” as a result, serves as a turning point in the season where both the audience and Carrie can turn the page on the absence of Brody – and the emotionally tied repercussions of that absence – and get back to business as usual. We can tell that this is that point where we “return to stasis” because Carrie begins working with her emotionally based instincts again after several episodes in which, mostly, a cold, hard, logical approach (lacking reasonable emotion) has been at her center. 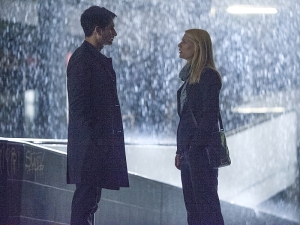 In episode eight, for example, she appears to “get a feeling” that her pills have been tampered with before she has a chance to swallow her next one. She also has the foresight to suggest discluding any further personnel from knowing that there has been a breach in the embassy before having a better grasp on who can be trusted, a suggestion that Lockhart shortsightedly dismisses. Later in the episode Carrie is also able to infer that Khan can be trusted based on what little she can remember of the night of her chemically induced episode. She also saves Saul and returns him to his captors, an act of emotion that counters her earlier cold logic that was willing to let him die for the mission.

Where earlier episodes of season four strongly suggested that an emotionally cut off Carrie Mathison is an ineffective one, this newly emotionally charged Carrie seems to be returning to her super spy roots. We will have to continue this rewatch to see if Carrie is back to stay or only here for a limited engagement.